With great pleasure, I announce that we were awarded through the Human Frontier Science Program. We are eager to start the chapter of synaptoneurolipidomics, and we are thrilled to start this great project with labs around the globe: 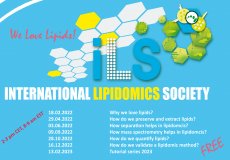 We are delighted to contribute to the “We Love Lipids” Tutorial in 2022, introducing lipidomics and lipid sciences. Please save the dates and meet us again soon! 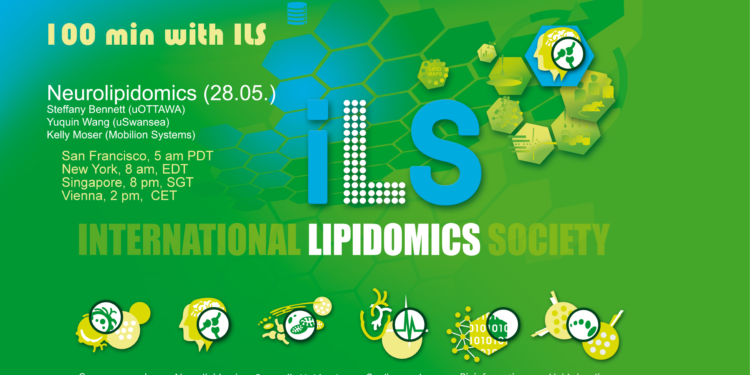 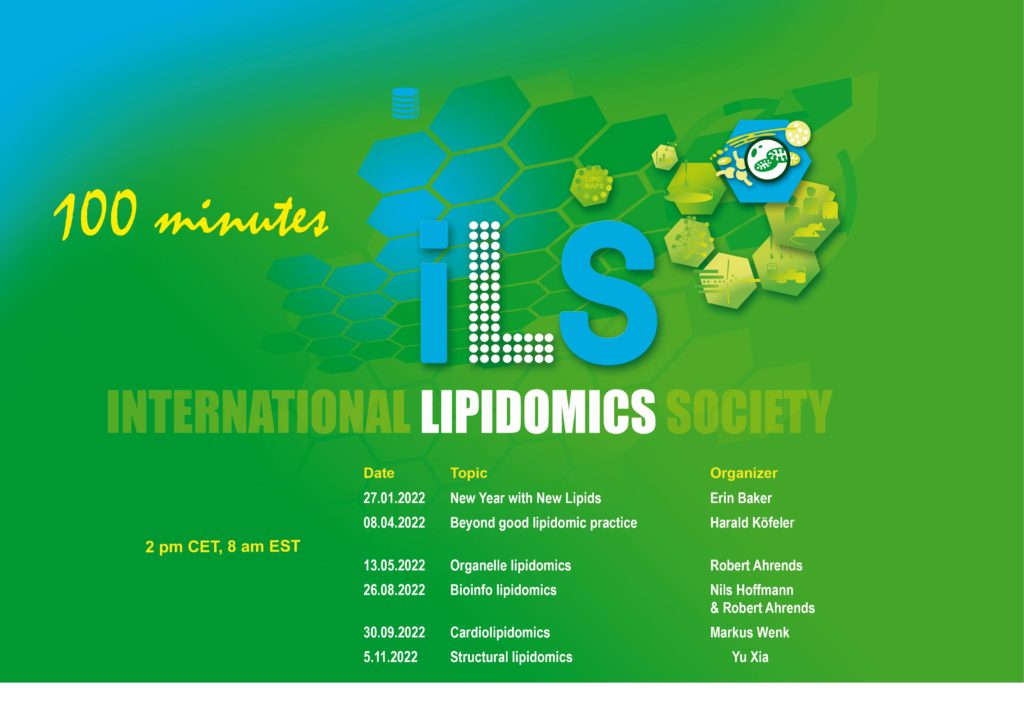 The major focus of his research group in the last decade is set on targeted lipidomics of oxylipins. His lab developed one the most comprehensive internationally validated platforms for the analysis of oxylipins. Using this approach, the effect how n3-PUFA as well as polyphenols elicit their beneficial effects on human health, are analyzed. Dr. Schebb has published >100 peer reviewed publications of those > 50 about the analysis, formation and biology of oxylipins. Prof. Schebb gave a fantastic talk at the lipidomics seminar (24th of June 2021) on:

We very much would like to thanks Prof. Schebb for his great and inspiring talk!

It is for us a great pleasure to have Prof. Thorsten Hornemann as a guest speaker in our Department at the 24th of June 2021 on the topic of sphingolipid signaling. Th. Hornemann is professor for clinical chemistry and head of the lipidomics research facility at the Institute for Clinical Chemistry, University Zurich. His primary interest is the sphingolipid metabolism where he pioneered by identifying several new lipid metabolic pathways. He and his team developed several unique analytical methods and metabolic labelling techniques to investigate the structure, function and metabolism of sphingolipids with a particular focus on rare and atypical sphingolipid metabolites. He also established several lipid metabolites and lipid based metabolic signatures as diagnostic and prospective biomarkers for cardio-metabolic diseases including NAFLD, CVD, MetS and T2DM.

Thorsten many thanks for joining us it is always fantastic to listens to such great science!

Thanks to all attendees who helped to make this a great event! The ILS Applied Bioinformatics Interest Group invited to join the Bioinformatics for Lipidomics Symposium on October 2nd, 2020, as part of this year’s joint virtual European Lipidomics Meeting & Lipidomics Forum. With over 150 attendees discussing the challenges and future of lipidomics bioinformatics the event was a great success! We were very happy that this conference was supported by the ILS and the University of Vienna.

The schedule is available at ILS https://bit.ly/2IdlyJl

The symposium was divided into four major sessions:

The presentations of this symposium will be available soon via the ILS homepage!!

We introduce Goslin (August 2020), a polyglot grammar for common lipid shorthand nomenclatures based on the LipidMaps nomenclature and the shorthand nomenclature established by Liebisch et al. and used by LipidHome and SwissLipids. Goslin was designed to address the following pressing issues in the lipidomics field: 1) to simplify the implementation of lipid name handling for developers of mass spectrometry-based lipidomics tools; 2) to offer a tool that unifies and normalizes the main existing lipid name dialects enabling a lipidomics analysis in a high-throughput fashion. We provide implementations of Goslin in four major programming languages, namely C++, Java, Python 3, and R to kick-start adoption and integration. Further, we set up a web service for users to work with Goslin directly. All implementations are available free of charge under a permissive open source license. Here some links:

With great pleasure Lipidomics.at presented Lipid Creator on the annual meeting of the international Society for Computational Biology (ISCB) at the CompMS COSI track in Montreal (June 2020). Here comes the link: https://www.iscb.org/cms_addon/conferences/ismb2020/tracks/compmscosi

The lab also would like to thank all the people involved in the development of LIPIDCREATOR and the infrastructure around it and for their support! Also, thanks for the great questions and good suggestions during ISMB!

Social distancing is a must, but should not block the science! Due to COVID-19, you have been impacted by the cancellation of conferences and are losing the chance to connect and to present your research. Therefore the lipidomics.at team is embracing the opportunity to present at virtual platforms. Updates where we go and present can be found here, please join to engage and discuss. We are also hosting regularly own seminars on Thursdays, please contact us for more information.

Proteomics of the Lysosome

The lysosome is the central lytic organelle of mammalian cells. After it has been regarded for decades as a static and unregulated “cellular waste bag”, it is becoming more and more apparent, that the lysosome is a dynamic and regulated organelle, which is playing a central role in cellular metabolism. This is further underlined by the fact, that malfunctions of lysosomal hydrolases result in a group of >70 rare inherited diseases, so-called lysosomal storage disorders, and that lysosomes can play a decisive role in more common conditions such as cancer and neurodegenerative diseases. We are investigating the composition of lysosomes as well as the lysosomal response to various disease pathologies using mass spectrometry based proteomics. In particular, we optimized strategies for lysosomal enrichment, the proteomic characterization of lysosomal and lysosome-interacting proteins, and the identification of novel lysosomal proteins. Using Quantification Concatemers (QConCats), we generated absolutely quantified stable isotope labeled internal standards for the absolute quantification of lysosomal protein copy numbers and developed a multiple reaction monitoring (MRM) assay covering ~400 peptides from 143 proteins. Analysis of cell lines, isolated lysosomes, and mouse tissues revealed a dynamic range of several orders of magnitude for individual lysosomal proteins and organ-specific abundance profiles. For a better understanding of lysosomal protein-protein interactions and structures, we performed cross linking mass spectrometry experiments with isolated lysosomes. We were able to identify ~4300 cross links from >1300 proteins including 882 interactions for lysosomal and lysosome-associated proteins. This enabled us to identify novel interaction partners, to validate known structures, and to propose novel structures for lysosomal proteins and protein complexes. Taken together, these data provide us with a better view of lysosomal composition, providing valuable information for a better understanding of lysosomal function.

Wien (UNIWIEN) – Resistance of cancer cells against therapeutic agents is a major cause of treatment failure, especially in recurrent diseases. An international team around the biochemists Robert Ahrends from the University of Vienna and Jan Medenbach from the University of Regensburg identified a novel mechanism of chemoresistance which has now been published in “Nature Communications”. It is driven by the Unfolded Protein Response, a cellular stress response pathway that alters gene expression and cellular metabolism to promote adaption and cell survival upon accumulation of unfolded proteins.

There is a broad range of mechanisms associated with chemoresistance, many of which to date are only poorly understood. The so-called cellular stress response – a set of genetic programmes that enable the cells to survive under stressful conditions – plays a key role in the development of numerous diseases and in chemoresistance. A better understanding of the cellular stress response pathways is therefore urgently required to develop new therapeutic concepts to overcome chemoresistance. “In this context, we employed comprehensive analytical approaches to gain deep and molecular insight into the Unfolded Protein Response, a cellular stress reaction induced by unfolded proteins”, says Robert Ahrends, group leader at the Department of Analytical Chemistry of the Faculty of Chemistry.

Unfolded proteins cause stress and disease

The Unfolded Protein Response (UPR) contributes to cancer development and progression and plays an important role in diseases such as diabetes and neurodegenerative disorders. For their study of the UPR’s molecular biological characteristics, the researchers applied state-to-art analytical tools in the context of a multiomics approach, combining large datasets from genetics, proteomics and metabolomics. This allowed them to define the Unfolded Protein Response regulon, a comprehensive list of genes that are activated to promote cell survival under stress.

“Besides the previously known factors, we identified to our surprise numerous genes that have not previously been implicated in stress response pathways”, explain the researchers, “and many of them have key functions in cancer development and cellular metabolism.”

Changes in cellular metabolism are characteristic of many cancer types and promote a rapid tumour growth, as Nobel Prize winner Otto Warburg demonstrated already in the 1930s in his ground-breaking work. In their study, the researchers discovered stress-mediated genetic regulation of enzymes involved in one-carbon (1C) metabolism which relies on the vitamin folate as a cofactor. Concomitant to the metabolic re-wiring, the stressed cells became fully resistant against chemotherapeutic agents, which target this specific metabolic pathway. This includes Methotrexate, a drug commonly employed in the treatment of cancer and rheumatic diseases. Detailed biochemical and genetic investigations revealed that resistance is driven by a previously unrecognized mechanism. According to the study authors, its precise molecular characterisation might lead to novel therapeutic concepts aimed at overcoming chemoresistance in cancer therapy.